The field for the next debate this Thursday on Sept 12th is baked. Following is my original prediction with the actual results color coded – names in green made the next debates, red did not, red strikethrough didn’t make the cut and dropped out of the running.

Frankly, I am pretty surprised this thing largely went the way I thought it would. The biggest surprised to me is that Beto made the cut. And while I am surprised that Marianne Williamson didn’t make it, I am also a little heartened. Seeing sanity prevail and logically cutting people with no prior governing experience and crackpot ideas is wonderful. She added to the conversation, so glad she was there, but it is her time.

There are 3 other intrepid souls running not listed above. Joe Sestak and Tom Steyer took advantage of everyone being distracted by summer vacations to do a stealth entrance to the race. Because that is the best way to run a presidential campaign, on stealth. The third, of course, is my man Wayne Messam. I think at this point he is investing nothing in the race so there is really no cost to staying in or dropping out. Ugh, 6 hours of debates took some time to digest.

Firstly I do like the time rules that CNN placed – they were very stingy with time and as soon as any candidate started pontificating or bloviating, they were cut off. It was great!!

Each of the 2 debates had very different dynamics based on their participants. The first featured the 2 far lefties Bernie and Elizabeth Warren and while they usually do a better job of controlling the conversation and driving a cohesive vision, the centrists came out SWINGING. They did a much better job of showing that they too can be passionate AND get stuff done. The second was “beat up on Joe Biden” night. Joe was prepared and came out fighting, showed he can take it tho, mostly.

The first debates last month annoyed me to no end because the candidates weren’t offered a chance to give an opening statement so each person just took their first chance (or two) to speak, ignored the question and just gave their opening statements then. Moreover, it generally encouraged them to say whatever talking point they wanted to and not ever try to stick to answering the actual asked question throughout.

I wanted to be prepared with a way to score them this time around. I came up with the following scale:

If the candidate had more than 1 chance to speak on a topic (like Biden, who was constantly being attacked so constantly got a chance to respond) their ratings were averaged for that topic. This was based on the quality of their answers, not necessarily if I agreed with it or not. The opening and closing statements were just graded on a flat 1-5 scale for how good they were.

The resulting table was stack ranked as an average of all of their answers (rightmost blue column):

Some quick thoughts from this:

Will have a more comprehensive recap tomorrow…

I was looking at the website for the clown leading this country when I hit a broken link and brought up the site’s 404 page (you know, the page that a web server generates when a user attempts to follow a broken/dead link).

Hah. “You’re looking for something that doesn’t exist” followed by a picture of a smiling President Hillary Clinton. 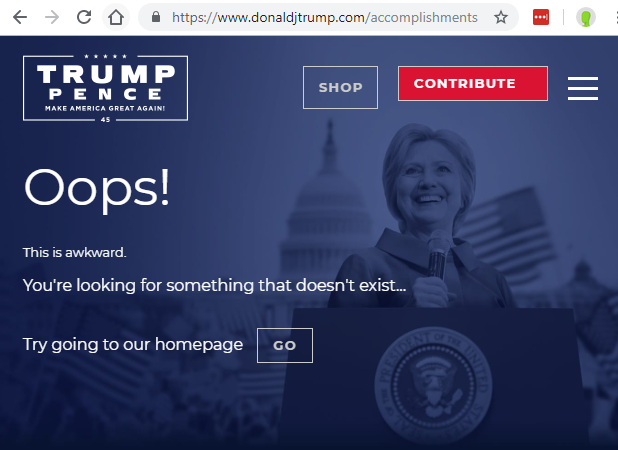 The page is actually brilliant. No matter who looks at it will get riled up in the exact way he wants them to – his supporters, disappointed at the fact that they are a broken link, will chuckle, “Hah! Yeah, that’s right, we show’d her!” Everyone else (myself included) will wring their hands “Why does he keep on bringing up Hillary? Can’t he just move on??” Both of us are then offered a chance to view more of Trump’s glory or give him money.

In any case, I thought it would be interesting to check out the 404 pages for the other presidential candidates. Let’s start with those who were at night 1 of the debate.

It seems like the Democratic field is baked in and with the debates looming, figured I’d update this view from about 4 months back.