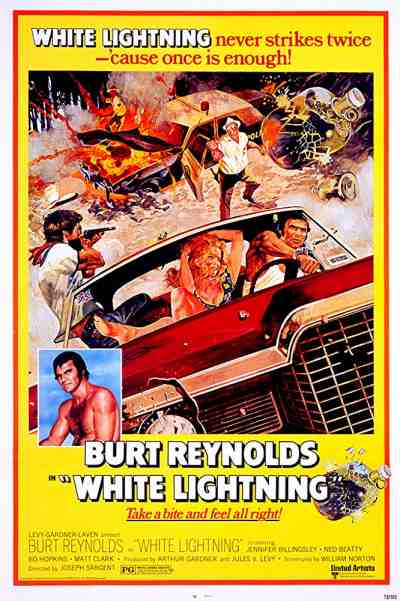 My DVD of Deliverance has a preview for White Lightning which I have been meaning to check out. The recent passing of Burt Reynolds plus a little free time over the holidays has given me good excuse to do exactly that and if I had to sum it up in one sentence – this has GOT to be the most redneck movie I have ever seen in my entire life!

This movie had everything that a self-respecting redneck could ever possibly want. It was chock full of, hillbilly action car chases, women-abusing white-trash country hicks, hot sweaty good old boys and the black people stayed to themselves (where they belonged!).

Setting the stage… the noble Southern farmers are suffering under the yoke of an oppressive system. Resisting the “man” (in whatever form he takes) is your god given duty. Whether it be countering those dirty hippies telling you how to live your life, not letting those damn Jews from New York City push you around or not letting the Feds infringe on your god given right to drink homemade whiskey free from the taint of a government tax.

Against this backdrop, lovable bad-boy Gator McKlusky was just trying to serve his sentence for the time honored tradition of running moonshine (distributing home made whiskey without paying the tax). However when he found out that his brother had been killed by the local sheriff he made a deal to give up his moonshine contacts in exchange for his early release which he would use to kill the evil sheriff. Well shenanigans ensued and Gator learned that it wasn’t worth giving up your peeps (but he still got his revenge anyways). Basically he learned that:

This movie was a fascinating snapshot in time, a window when these types attitude were much more normalized. Even 20 years on, a lot of the same redneck culture still exists. Does anyone remember those Pace Salsa commercials from the early 90s? Now these are clearly jokes, but there is no way that commercials these days would imply physical violence, lynching or eating Velveeta is something you should ever do.

This is the best example of how this mentality/attitude still lives on.

Well, second best. When Trump says he wants to make America great again, I have now experienced the “again” he is talking about.