I just took the New Jersey Express from Penn Station in New York City to the Newark Airport (EWR), it was one of the most painful transit experiences I have ever had in the U.S. 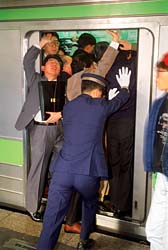 There was a monumental herd of people all packed into the waiting area. Everyone was waiting for trains that were all running late. As soon as a train’s platform was posted, there was an immediate stampede to that platform. Invariably there would be some sort of bottleneck – a doorway or stairwell in which a large pack of people would get stuck behind in which a large herd forms. It was only 1 step away from requiring these “pushers” that they have in Japan to make sure everyone gets on.

I have 2 beefs with this situation:

When society does finally break down a la Lord of the Flies, it will start at a place like this.