1. Next steps…
Of everything that will come from tonight, the most evident, apparent, fundamental truth of the universe is that we are going to soon be entering round 10 of Presidential Apprentice (you guys know the rules here, every time someone drops out of the race (i.e. is “fired”), we enter a new round of Presidential Apprentice). The next poor sap to leave is going to be poor Jim Gilmore who got a good old fashioned beat down tonight. Not only did he come in dead last of those running, he got beat by 3 people who are not even running.

Over 10 times the number of people voted for Rand Paul!

2. Bizarro World
I still have night-terrors about the possibility that Donald Trump could be the leader of the free world, but this night could very well be foreshadowing to the day this when this country is plunged into a crazy bizarro world and we see Trump vs. Sanders in the general election. Back in the summer, you had to be smoking some good quality crack to even think that was a remote possibility and yet here we are.

3. Are you smarter than a 1st grader
I was trying to explain the state of this mad mad world to my 6 year old and think I have come up with pretty good nutshell-descriptions for the Democrats… you have:

Emit from the Lego Movie (i.e. Martin O’Malley – I know he’s out, but like Jim Gilmore, I give him props for sticking it out as long as he did):

My 6 year old then of course asked about the only person in this race she ever hears about on the news, The Donald. Trying to keep my language appropriate to a 6 year old (Salim’s World is a family place after all 😉 ), I finally alighted on big haired troll as a reasonable characterization. She may not be able to spell big-haired troll, but she does know how to operate google voice search and soon asked me if he looked like:

Frankly, this wasn’t bad, but we eventually decided on this guy (from the Powerpuff Girls):

That got me thinking, Chris Christie is definitely Boss Hogg (Dukes of Hazzard reference here for the kids and the non-Americans): 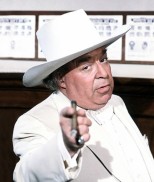 This of course makes Marco Rubio, Enos (also from the Dukes of Hazzard):